Diagnosed with severe stress injury and immense pain in the knee area, the 26 year old doctor and young National Pole Vaulting Champion had to give up her athletic training. Sports medicine specialists at Fortis Hospitals conducted advanced procedure and got her back on her feet. 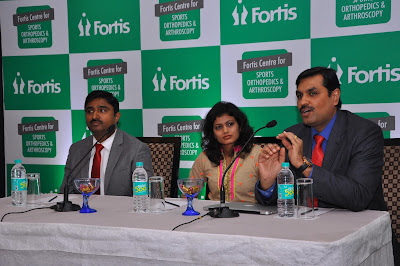 Bengaluru : Cutting edge technology and expertise in the realm of sports medicine is changing the way sports related injuries are treated. At Fortis Hospitals, doctors are at the forefront in helping sportspersons realise their full potential by giving specialised therapy for any injury or health setback.

Through the advanced techniques and in-depth knowledge available to them, sports medicine specialists at Fortis Hospital in Bangalore helped a city-based national pole vaulting champion, who was suffering from severe pain and discomfort due to an internal knee injury, get back on her feet. The sports medicine team at the hospital used a combination of targeted radiotherapy and stem cell medicine to successfully treat the sportswoman.
DIAGNOSING THE CONDITION :An all-round achiever, Dr Khyati Sharad Vakharia not only excels in sports but was also adjudged outstanding student while passing out of medical school in 2013. But nothing had prepared her for the painful and limiting knee condition that she developed about two years ago.
Khyati has been an impressive gymnast for the last four years and has also represented India in Pole Vaulting championships. This meant that she was dedicated to a disciplined and strenuous training regime. Two years ago, she started experiencing pain around the front portion of her left knee joint, which she ignored initially thinking it was nothing serious. But over the months when her pain aggravated so much that she was limping and forced to stop training for a year, her mother was worried and advised her to see a doctor.
She consulted an orthopaedician who did some initial tests and a MRI revealed that she was suffering from Patellar Tendinitis with Hoffa’s Pad thickening. The patellar tendon is the structure lying below the kneecap (patella) which attaches it to the shinbone and these muscles allow the knee to extend or straighten. In this condition, there is build up of tension in the area, caused by overuse and strain on the knee cap. Also called jumper’s knee, it is commonly seen in most sportsmen and more commonly in sportswomen. She had also developed thickening of the fat pad (a mass of fatty tissue that lies below the kneecap), which causes excruciating pain in the front part of the knee.
Following the diagnosis, she was referred to Dr P C Jagadeesh, Consultant Arthroscopy & Sports Medicine, Fortis Hospitals.
“When she came here, Khyati was limping and could not climb stairs. She was using the support of her right leg to walk. A detailed examination including stress extension test of the knee revealed tenderness under the kneecap and we diagnosed it as a condition called Chondromalacia, which had not been picked up by the MRI earlier. To confirm the diagnosis, arthroscopy was done which revealed severe damage to the cartilages,” said Dr Jagadeesh.
Chondromalacia is a condition where the cartilage on the under-surface of the kneecap deteriorates and softens. This condition is common among young, athletic individuals, but may also occur in older adults who have arthritis of the knee.
TREATMENT AT FORTIS      Dr Jagadeesh and his team chalked out an extensive treatment plan for Khyati. Keyhole surgery (Arthroscopy) was carried out with the use of Radio Frequency Ablation (RFA) to trim out and smoothen the damaged cartilages. RFA is a procedure wherein plasma energy is produced by a radio wave over a small area which helps in removing cartilage fraying or burn nerve tissue, thereby decreasing pain signals from that specific area,” explained Dr Jagadeesh.
The Tendinitis was treated by administering PRP (Plasma Rich Protein) injection to the tendon under ultrasound guidance. This is a type of stem cell therapy that helps rejuvenate the injured part of the knee and speeds up the healing process. This type of therapy helps sportspersons get back in form fast.
“As a doctor, my understanding of my ailment was far better than a lay person who may suffer similar injuries. But the greater advantage was that I was able to undergo treatment by a Sports medicine specialist. Compared to a regular orthopaedician, his understanding of the sport, assessment and treatment was far superior,” said Khyati, who also underwent physiotherapy and rehabilitation sessions advised by the doctor after her surgery. This helped in strengthening her knee muscles and sensitising the nerves around the knee.
Now, she is up and running and getting ready to go to the United States for training, so that she can live her sporting dream.
Posted by Unknown at 18:55