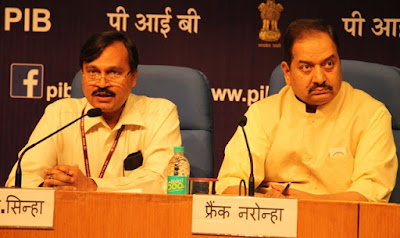 New Delhi : The Ministry of Culture, Government of India, today announced that it would be hosting the most diverse cultural festival of India - RASHTRIYA SANSKRITI MAHOTSAV, which will be held from November 1 to 7, 2015 at the IGNCA, New Delhi. This seven day festival will showcase the spectacular diversity of India, from Kashmir to Kanyakumari through folk, tribal and classical art forms in all its dimensions - dance, music, drama, entertainment & food.
The 24-acre IGNCA campus, near India Gate, will come alive with more than 150 art forms, 1500+ artists, star performers every evening and also performances by artists and performers from across the country. In addition to this, renowned artists including Gurdas Maan, Sharda Sinha, Roopkumar Rathod, Sonali Rathod, Toufiq Qureshi, Malini Awasthi, Pt. Sandeep Mahavir among others will be performing adding enormous glitz to the event.
The Mahotsav has been conceptualizedto promote, Preserve and Popularise India’s rich heritage and it is an open entry programme.The Rashtriya Sanskriti Mahotsav willalso present a food and shopping extravaganza featuring the very best of indigenous handicrafts and flavours. Guests can indulge themselves in dishes prepared by Traditional Masterchefs featuring a menu that includes Kashmiri Wazwan (traditional multicourse meal), Amritsari Kulcha and Makki Roti from Punjab, Litti Chokha (a Bihar specialty made out of wheat and sattu), Malai Makhan (milk based sweet), Jhunka Bhakar (the meal that revolutionised rural food in Maharashtra), Akki Roti (a rice based roti from Karnataka),authentic Hyderabad Biryani amongst other delectable dishes. The venue will be a shopping destination with wide array of arts and crafts like Haveli paintings from Punjab, Rogan artworks from Gujarat, Banaras silk, Kalamkari (hand-painted or block-printed cotton textile) &Tanjore paintings amongst others.
Talking about the RASHTRIYA SANSKRITI MAHOTSAV, Shri N.K. Sinha, Secretary, Ministry of Culture, Government of India, said: “The thought was to create an Annual Festival that popularizes and showcases the cultural diversity of India be it art, artisans, dance, handicrafts or flavours from cross the nation. The seven day festival will attempt to recreate the vibrant culture and its diversity”.
The RashtriyaSanskritiMohotsav, will go a long way in preserving and documenting the cultural diversity of India by showcasing ancient art forms such as Dhal Talwar Raas (dance using real swords and shields) from Udaipur, Dollu Kunitha (musical dance form) from Karnataka, Lai Haroba (traditional dance to please the god) from Manipur, Ghoomar (traditional folk dance form of Rajasthan), Godambaza (Tribal dance from MP), Rikampana from Arunachal, amongst several others.
The festival began with a precursor, Rashtriya Sanskriti Yatra, which is a programme to introduce the youth to the various facets of our culture by entertaining and engaging them. The youth outreach programmes involve institutions like DeenbandhuChhotu Ram University, Delhi Haat, Village Shilana, and across other schools, colleges and universities of India.
With an objective of connecting the younger generations with the sheer diversity of Indian culture, this festival will present a unique opportunity to witness folk, traditional, tribal and classical art forms of India at one destination. The festival will also involve schools, colleges and the younger generation from all walks of life thus creating a connect across audiences by entertaining and educating them at the same time.
14 premier organizations dedicated towards the support, promotion and growth of Indian Art and culture are coming together to celebrate this unique ensemble of India.
The seven Zonal Cultural Centre's of India [ZCC's of East, West, North, South, North Central, South Central and North East], Buddhist and Tibetan Institutes of India [BTI], National School of Drama [NSD], Sahitya Akademi [SA], Lalit Kala Akademi [LKA], Sangeet Natak Akademi [SNA], Kalakshetra Foundation [KF]have come together to create the Rashtriya Sanskriti Mahotsav, as part of which, they will be presenting the arts, culture and heritage from their respective regions via unique displays in their respective courtyards, also called Aangans.
The North Zone Cultural Centre, Patiala has been entrusted with the responsibility as the nodal agency to carry forward the execution of the National Cultural Festival.
Posted by Unknown at 05:46