TMEIC to Invest US$35 Million for Business Expansion in India


March 23, 2016 – Toshiba Mitsubishi-Electric Industrial Systems Corporation (TMEIC; headquartered in Tokyo, Japan) has announced its plan for making an additional investment in India. In line with this, to address the rapid expansion of new orders for PV inverters, in particular, the Company will build a power electronics factory on newly acquired land situated adjacent to the motor factory of TMEIC Industrial Systems India Private Limited (TMIND).

TMEIC has previously invested nearly US$65 million for strategically growing its business operations in India, including construction of the motor factory. The additional investment planned totals approximately US$35 million. Nearly 60% of this amount will be used as capital for constructing a new factory roughly 10,000 square meters in size, while the remainder will be utilized to augment operations for the further business expansion of TMIND.

Construction of the new factory will start from this spring with the aim of commencing operations from around summer 2017. Together with relocating operations from the current power electronics factory acquired from AEG Power Solutions BV in 2014, approximately 250 people are expected to be employed at this production site. Additionally, the new facility exemplifies the concept of a next-generation “recycling energy factory” equipped with a solar power generation system.

In terms of PV inverters, TMIND has received a large volume of new orders in India and the factory is continuously operating at full capacity. Additionally, as the global leader capturing the top share of PV inverters, TMEIC will supply PV inverters made in India not only locally but also throughout the world. The new factory will be genuinely designated as the core of TMEIC’s renewable energy business.
A UPS responds to critical power sources for data centers and other purposes. This product actually has a high technical commonality with PV inverters. While UPS made in Japan currently are being sold in India and new orders are steadily being received, TMEIC plans to produce products locally at the new factory directed toward making full-fledged inroads into the Indian market.

With regard to motor drive inverters, TMEIC aims to expand these products as drive systems combined with motors. The new power electronics factory seeks to realize an ideal environment as a system in which motors and inverters will be produced at the same location.

Construction of a new factory is the culmination of the means for achieving TMEIC’s strategy in India, and with the additional investment announced at this time, TMEIC’s investment in India will total US$100 million on a cumulative basis, which during the past three years is the largest investment TMEIC has made in any country worldwide, including Japan.

TMEIC will undertake concerted efforts to realize the further growth of TMIND as an Indian company toward the realization of the “Make in India” initiative.
Posted by Unknown at 07:19 No comments:

Bengaluru, March 22 : ‘Idea Jalsa – Music for the Soul’ is back in Bengaluru and will feature Suma Sudhindra, a renowned Veena exponent of India along with The Legendary Padma Vibhushan Pt. Hariprasad Chaurasia on flute followed by a powerful Hindustani Classical Vocal Performance by the living Legend of India Sangeet Martand Padma Vibhushan Pandit Jasraj. The 12 city concert tour commenced from Chennai on February 5, 2016, and will now travel Pune and culminate in Bengaluru on the 26th of March.

Music finds itself at the core of Idea Cellular Ltd.’s brand building and customer connect strategy. Indian Music has the ability to reach out to a cross section of society, with no barriers of language, caste, creed, etc. ‘Idea Jalsa – Music for the Soul’ is a unique project which has been partnered by Idea Cellular Ltd. since its inception in 2006. It has grown from strength to strength and has come to stand for ‘excellence’ & ‘quality’, engaging the large community of music lovers across the country. As always, Idea Jalsa will bring together legends, maestros, stars, young maestros and the rising stars of Indian music, to showcase the rich cultural heritage of India. The Idea Jalsa platform has already presented more than 7,000 musicians across genres! A proud achievement for Idea Jalsa this year, is the support that the Ministry of Tourism, Government of India has extended.

“Idea Jalsa is the largest platform for Indian Music across genres, which has been established with the active support of Idea Cellular Ltd. and has crossed many milestones in its journey since 2006, e.g. entering the Limca Book of Records, reaching more than 30 crore audiences through its TV telecasts, being the 1st Indian Music project to be webcast live, telecast in 165 countries worldwide on Zee International and also being on 15 International Airlines’ inflight entertainment. We are very humbled that the Ministry of Tourism, Government of India has agreed to support this project with Incredible India.” said Durga Jasraj, Founder & Director, Art And Artistes.

Commenting on this occasion, Mr. Siva Ganapathi - Chief Operating Officer, Karnataka, Idea Cellular, said, “Idea Cellular has always considered music to be one of the important avenues to connect with our customers across the country. Idea Jalsa is one such platform which brings together legends, maestros, stars, and rising stars from the Indian music fraternity, to present a rich & diverse showcase of Indian culture for all music enthusiasts across the country and champion Hindustani classical music. We are happy to bring these unique performers and musicians to Bengaluru and are hopeful that our customers will join us in this celebration of music.” 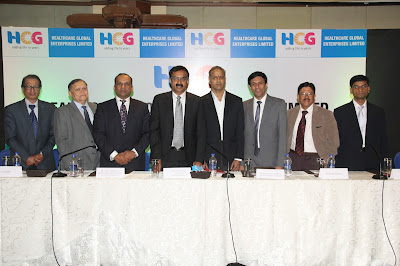 The equity shares are proposed to be listed on the BSE and the NSE.
Posted by Unknown at 06:20 No comments: