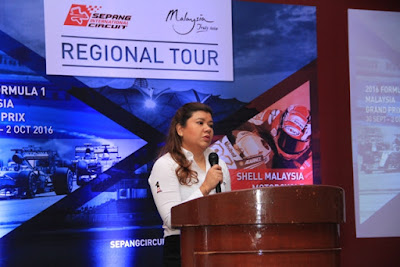 Bangalore: Sepang International Circuit (SIC) in Malaysia is cranking up the adrenaline this October 2016 as it hosts the world’s two biggest motorsports events in the same month. This motorsports extravaganza will see the 2016 Formula 1 Malaysia Grand Prix (F1 Grand Prix) taking place from 30 September to 2 October 2016 - Round 16 of 21, while the Shell Malaysia Motorcycle Grand Prix 2016 (MotoGP) will be held from 28 to 30 October 2016, maintaining its position as the penultimate round of the 18-round championship.
“Sports fans in India have increasingly begun to embrace the excitement of motorsports in the recent years. The attendance of Indian visitors at the F1 Grand Prix and MotoGP have increased each year, and if we look at the numbers recorded in the past four years alone, there has been stunning growth,” said Dato’ Razlan Razali, Chief Executive Officer of SIC. In 2012, only 117 visitors from India attended the F1 Grand Prix and 22 attended the MotoGP, while by 2015, the numbers were 1,191 at the F1 Grand Prix (10 fold increase) and 827 at the MotoGP (37 times more).
“There are teams and riders for patriotic fans to root for, such as Team Sahara Force India in the F1 Grand Prix and Aspar Mahindra Team Moto3 in the MotoGP’s Moto3 class. Additionally, there is Mahaveer Raghunathan racing for the Korainen GP team in the GP3 series and Ahamed Kadai Yaseen, India’s first and currently only participant in the Shell Advance Asia Talent Cup to cheer on.” added Dato’ Razlan.
“It’s encouraging to see so many sports enthusiasts travelling to Malaysia. We are in talks with travel agents, SIC and the airlines to come up with special packages for the events. Besides sporting events, SIC is also a perfect venue for meetings and other gatherings. We are hoping to get a lot of inflow through our various MICE engagements as well, ” said Mr Noor Azman Samsudin, Director, Tourism Malaysia.
In addition to main action on the track, visitors will also be able to enjoy other activities like the Drivers' Autograph Session, X-Track for all ages, Public Pit Lane Walk, Drivers Fan Forum, Malaysia Championship Series and the after-race concert, located at Hillstand B.
Meanwhile, the MotoGP weekend will feature the Mega MotoGP Carnival offering fans everything they could want, from souvenirs to accessories to limited edition merchandise or even a brand new bike, and other popular activities such as the Riders' Autograph Session, Public Pit Lane Walk and the SAATC talent development championship as a support race.
Ticket pricing
Tickets for the 2016 F1 Malaysia Grand Prix include Main Grandstand tickets priced from INR 9,220 to INR 36,500 in various seating areas. Star Stand (Hillstand B) and C2 Hillstand (Covered) tickets at INR 3,750 and INR 3,400 respectively allowing fans to catch both the race and the post-race concert from a premium vantage point on the same spot. Other tickets entitle the holder entry into the concert area. Standard ticket prices for the 2016 Malaysia MotoGP range from INR 6,100 for a Premier Roving pass to INR 1,300 for a C2 Covered Hillstand ticket.
This year, SIC has also introduced child tickets for the F1 Grand Prix with up to 50% price reduction, as well as 50% discounts for disabled* spectators at accessible seating zones. Meanwhile, for motorsports fans who enjoy luxurious settings, SIC offers an array of options and hospitality packages. These include VIP and Corporate suites and hospitality lounges, and the F1 Paddock Club.
To find out more about the hospitality packages, ticket pricing and activities lined up for 2016, visit Sepang International Circuit’s website at www.sepangcircuit.com. Tickets are available via the website and from authorised agents in India.
Posted by Unknown at 19:39