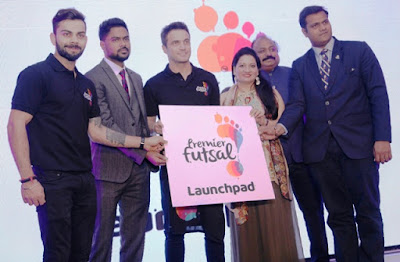 Bengaluru : Premier Futsal today launched a nationwide talent hunt to identify and pick the top local futsalling talent to play in the inaugural season of the world’s first-ever multi-national futsal league. Dubbed ‘Premier Futsal Launchpad’, the talent hunt will kick off on May 26th in Mumbai, taking in seven other cities across the country before it concludes on June 21st in Delhi.
The talent hunt will pick a total of 40 players – five per city – who will go on to represent their home cities in the league. Global futsal legend Alessandro Rosa Vieira ‘Falcao’, Premier Futsal league ambassador Virat Kohli and Chairman Xavier Britto launched the talent hunt.
Premier Futsal Chairman, Xavier Britto said, “The Premier Futsal League is a unique concept in that it’s the only multi-national futsal league in the world. But even as the league will have the best global futsalling and footballing talent on display, we are committed to driving the holistic development of the sport through the creation of a strong base of local players.
Alessandro Rosa Vieira ‘Falcao’ said, “I think the concept holds a lot of promise and has the potential to grow what is a truly spectacular, fast-paced game in a major way in India. While I’m really looking forward to testing my skills against the world’s best futsal and football players, I’m equally excited to be measuring myself against the best India has to offer.”
Premier Futsal league ambassador Virat Kohli said, “The launch of Premier Futsal is a massive shot in the arm for Indian sport. We’ve seen India’s appetite for different sports growing over the last few years and I’m sure a sport as exciting, competitive and riveting as futsal will strike a chord with sports fans here. I think the talent hunt is a great initiative which will nurture local talent and help futsal establish itself firmly among India’s most followed sports.”
The talent hunt is open to any applicants between 18 to 24 years of age. Aspiring futsallers can register to be part of the talent hunt online or on the spot at select sports clubs and colleges across the eight cities that Premier Futsal will be visiting.
Managing Director, Premier Futsal, Mr. Dinesh Raj said "The talent hunt will not only give the top homegrown futsalling talent the chance to measure themselves against the best the world has to offer, but also set the stage for the emergence of the next generation of futsal stars.”
Applicants will be put through their paces at a three-day camp in each city, where they will be evaluated for physical fitness and mental agility, and technical attributes like flair, creativity, positioning, dribbling, passing and tackling.
About 25 of the most promising candidates from each city will then advance to an exhaustive three-week boot camp in Mumbai, where they will train along with international players, before five from each city are chosen to represent their home side in the league.
The cities which will host the talent hunt are – Mumbai, Goa, Cochin, Chennai, Bangalore, Kolkata, Hyderabad and New Delhi.
Premier Futsal, the world’s first multi-national team-based Futsal league, is set to take place in India from July 15th to July 24th with each game split into two halves of 20 minutes each. Over 50 International Futsalers, from four Continents and 21 countries are expected to participate. The league, governed by the Futsal Association of India (FAI) with accreditation from international governing body, Asociación Mundial de Futsal (AMF), was launched in Mumbai earlier this week in the presence of the founding team and FAI representative
Posted by Unknown at 06:54