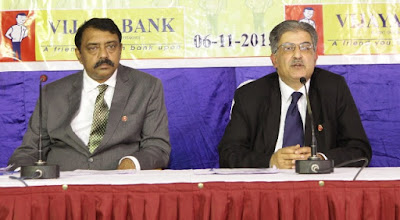 Bengaluru: Vijaya Bank reported 19.79 per cent decline in net profit at Rs 115.29 crore for the second quarter ended September 30, 2015, due to higher provisioning. The bank had reported net profit of Rs 143.75 crore in the corresponding quarter last year.
Vijaya Bank Managing Director and Chief Executive Officer Kishore Kumar Sansi said, “The decline in net profit is attributed to increased provisioning. This quarter we have taken a provisioning of Rs 283 crore, of which Rs 272 crore is on account of NPAs.”
“Fresh slippages for this quarter is around Rs 600 crore. Most of them have come from infrastructure and large corporates. This quarter, NPAs are at their highest ever, and we have tried to be more transparent. Wherever we were a little doubtful, we have classified those loans as NPAs,” Sansi added.
The bank’s total income also declined by 1.56 per cent to Rs 3,202.89 crore compared with Rs 3,253.75 crore a year ago, Vijaya Bank said in a filing to the BSE. However, the operating profit was up 30.35 per cent to Rs 399.01 crore compared with Rs 306.10 crore.
Net Interest Income (NII), or the difference between the interest earned on loans and the interest paid on deposits, stood at Rs 692.55 crore in the fiscal second quarter, up 19.67 per cent from Rs 578.70 crore a year ago.
The public sector lender’s other income rose 14.17 per cent to Rs 193.93 crore, compared with Rs 169.85 crore last year. Gross non-performing assets (NPAs) ratio increased at 3.98 per cent against 2.85 per cent last year, and net NPAs were up 2.84 per cent against 1.88 per cent last year. The bank’s capital adequacy ratio (CAR) under Basel-III norms stood at 10.83 per cent, compared with 10.21 per cent last year.
Posted by Unknown at 21:35