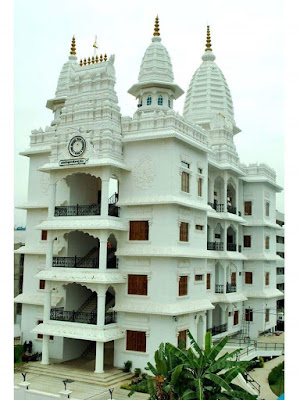 Bengaluru: The 1st anniversary celebration of the Sacred Srimandir of Yuga Purushottam Param Premamaya Sri Sri Thakur Anukulchandra was held on the 13th December at Medahalli in Bangalore with the blessings of Acharyadev Sri Sri Dada.
Around 15000 devotees from various parts of India and abroad attended the celebration. The Srimandir was inaugurated last year in the presence of Rev Arkadyuti Chakravarty, the great grandson of Sri Sri Thakur Anukulchandra.This is the first Srimandir of Satsang in the state of Karnataka.
The daylong celebrations began with the congregational prayer at 6-34am. It was followed by readings from the divine literature of Sri Sri Thakur Anukulchandra.In the general meeting at 11 am, Dr.Radheshyam Biligrami, SPR, Satsang and Ex-Professor, Muzaffurpur University described ‘Satsang’ as a man-making institution. He highlighted how millions of people have reformed themselves by following the path of Satsang. Sri Dhriti Sunder Bhtaacharya, SPR Satsang and General Manager- R&D at 3M emphasized the need to lead an ideal-centric life to achieve harmony, peace and balance. Hedescribed how SriSri Thakur’s teachings have transformed millions of lives. Sri SV Rao, SPR, Satsang said, that the utter indiscipline and chaotic conditions that prevail today resulting from the lack of self-adjustment. Without active attachment to a living Ideal, a man can never adjust himself, his family, society or state.Sri Surya Prakash Mohapatra said that the more people congregate under the banner of a single Ideal through the medium of initiation, the greater sense of interestedness will evolve.
Several other events and cultural activities were held during the day long celebrations. Free Health Check-up Camps were organized where more than 1000 patients were treated with free medicines. Over 15000devotees of satsang from all parts of India and abroad participated in the celebrations.
Elaborate arrangements for free accommodation, hospitality, prasad distribution, sanitation were made by the local devotees. A very positive vibration among the satsangees and admirers of Sri Sri Thakur prevailed all through the day.This created an urge for the existence and growth of mankind in order to reform the present society. Over 1000 persons took the holy initiation.
Sri Sri Thakur Anukulchandra was the founder of Satsang Movement that started in the first decade of the last century. There are more than five thousandSatsangSrimandirs, vihars and centers in India and abroad and more than five crores devotees consisting of Hindus, Christians, Muslims, Sikhs and others. Ever since its inauguration, SatsangVihar, Bangalore has been spreading the message of ‘being and becoming’ and ‘life and growth’ among people in and around Bangalore and Karnataka.
Posted by Unknown at 04:27