Godrej Nav-Tal gets a facelift ! 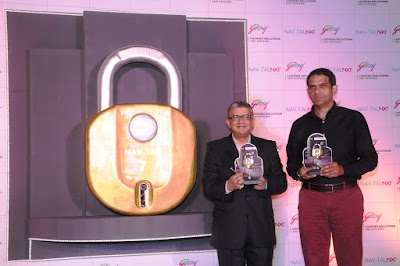 Bengaluru: Godrej Locking Solutions and Systems (Godrej LocksS), the 118-year-young company of innovative locking systems and the founding business of the Godrej Group, is proud to present the new avatar of security in India — Nav-tal NXT.
The iconic Nav-Tal lock is emblematic of the sixty-year-old journey of locks in India and brought a sense of security to the doorsteps of each Indian home. The brass circular body has remained as a symbol of trust and is synonymous with security and robust quality in India. A recent consumer insight indicated that, while Nav-Tal still ruled as the most trusted and first choice among consumers, the new generation of consumers wanted to see it in a more stylish avatar! And to fulfil the consumer preference of the millennials, the iconic brand has undergone a face lift and transformed into – Nav-Tal NXT. The new version has a refreshing look and boasts of several key features such as trendy semi-curved body with shiny-fine finish in bright brass, longer “p” shaped Mazak keys, and offers 45,000 possible key combinations to further bolster the security of your homes.
The sturdy and convenient design of the Nav-Tal fits right into the palms of the consumer, and the Ferrule-less design, although seems like a simple innovation, adds a lot of convenience. It’s so convenient that you can even open the lock when its pitch dark!
Commenting on the Nav-Tal NXT, Mr. Navroze Godrej, Executive Director, Godrej & Boyce stated, “With design-led innovation and customer centricity at the core of its operation, Godrej Locks has always been a champion of innovations in the industry. The Nav-Tal has always been revered as the iconic brand that set the foundation for the Godrej legacy. The genesis of Nav-Tal NXT lies in the evolving preference of the new generation of consumers who wanted to see iconic Nav-Tal in a more stylish avatar. We are confident that Nav-Tal NXT would inspire the new generation just as much as it inspired and enthralled the generations in the past.”
Shyam Motwani, Executive Vice-President and Business Head, Godrej Locking Solutions and Systems added, “Nav-Tal NXT is an extension of the trust that has made Nav-Tal a preferred choice for all consumers due to its uncompromising quality and security. Godrej as a trusted brand has always exceeded industry standards. Nav-Tal NXT is not only crafted in accordance with the design aesthetics preferences of the next generation but it has also evolved in terms of security and technology compared to its predecessor. The proof-point of this lies in the fact that each Nav-Tal NXT undergoes 50,000 quality testing cycles even though the standard requirement is only 10,000.”
The new look has been designed by ace industrial designer – Michael Foley, one of the most famous and iconic industrial designers of our time! His repertoire of work across sectors has been momentous in its own right. He stated, “A lot of my design sensibilities come from customer insight and a high attention to detail- both of which have been intricacy incorporated into the new Nav-Tal design. Redesigning an iconic product was indeed a privilege. However, it was a challenge to remodel a classic and famous product because of element of legacy that it brings with it.”
This trendy lock design promises to take the Indian décor market by storm and recapture the hearts of consumers that have sworn by the solid stamp of safety and reliability. Godrej LocksS, which builds products based on strong consumer insights, has always kept customer centricity at the core of its operations. The Nav-Tal NXT will also be available through prominent e-commerce websites in addition to the existing market distribution system and channel partners.
Posted by Unknown at 21:03