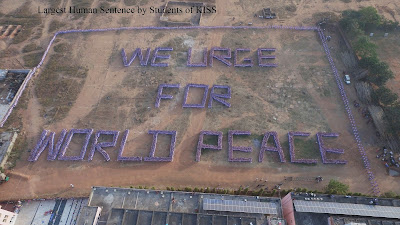 
It was a proud moment for Indians as two new records made its entry to the Guinness World of Records on a single day! The tribal students studying at Kalinga Institute of Social Sciences (KISS), world's largest tribal school, created the Guinness World Records by making the ‘Largest Human Sentence’ and 'Most Simultaneous High-Fives' on Wednesday. Around 15,225 students of KISS created the human sentence - ‘WE URGE FOR WORLD PEACE’ - in presence of Guinness World Records officials. On the eve of International Human Rights Day, students of KISS gave a message of peace to the world as well as need to join hands against terrorism. The second record was created when the students of KISS achieved ‘Most Simultaneous Hi-Five in a Human Chain'. As many as 25,151 students participated in making of this record.
The previous records for largest human sentence was created in November 2015 at Dubai where a total of 6,958 participants from 35 different schools formed the words “HAPPY NATIONAL DAY”. The Dubai students had then broke the record for the largest human sentence created in May 2015 in France by 6,282 participants when they spelled out "Tien's Dream is nice in the Cote D'Azur." Interestingly, the human sentence by Indian students has almost doubled the record set in Dubai and France. Similarly, on 29th August 2015, record for the 'Most Simultaneous Hi-Fives in a Human Chain' was made in Canada by 7,238 people. The students of KISS also shattered this record and achieved. Ms. Fortuna Lisa Burke, an official of Guinness World Records, group of auditors and group of witnesses were present to watch the six-hour long programme and adjudicate the world records. Creating the record was not an easy job as the KISS students had to wear the same colour and stand perfectly still for five minutes while forming the sentence grammatically correct.
Meanwhile, on Thursday, around 25,000 students from KISS created a human chain that spread across 30 kilometres length of road in Odisha capital Bhubaneswar. The event was inaugurated by Odisha Governor SC Jamir and Chief Minister Naveen Patnaik took part in the concluding ceremony. Expressing his happiness over this achievements, Dr. Achyuta Samanta, Founder, KIIT & KISS thanked the officials of Guinness World Records and students of KISS, and said, it is not only a matter pride for KISS, but also for Odisha as well as entire country. Students of KISS gave a message to world to join hands against terrorism and to bring peace on the eve of World Human Rights Day.
Posted by Unknown at 06:02