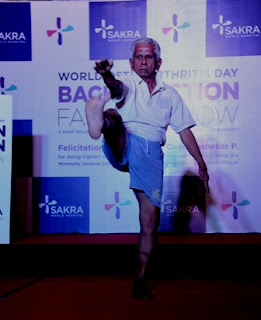 Bengaluru, October 10: At the age of 81 when most of the people are barely active, Mr. Srinivas is adept at performing Yoga that too after undergoing a major Joint replacement surgery. Suffering from arthritis, nothing could daunt Mr. Srinivas’s spirits, he says, he wanted to live an active life.
Celebrating the World Arthritis Day on Saturday, Mr. Srinivas performed several asanas that even young people would feel shy to do. It was a unique celebration of World Arthritis Day to share and learn about Arthritis and its success stories straight from people who have been freed from the clutches of Arthritis with successful surgeries. A fashion show was also organized in which people who have undergone Joint Replacement Surgery walked on the ramp.
The patients were invited for a Ramp Walk in order to inspire suffering community of Arthritis. Nearly 20 people participated and walked the Ramp, demonstrated Yoga and sway their freedom of walk in front of people attending this event.
At the event, Dr. Chandrasekhar P. Head of the department, Sakra Institute of Bone and Joints at Sakra World Hospital was also felicitated for introducing “Computer Assisted Knee Joint Replacement Surgery technique” and also for doing the highest number of Knee Joint Replacement Surgery using Minimally Invasive Computer Assisted Knee Replacement Surgery. Dr. Chandrasekhar P who is renowned in his field was also the chief guest at the event.
“We generally think that arthritis affects only those above 60 or men specifically. But an increased number of rheumatoid arthritis cases in women and juvenile arthritis in youngsters and children are also nowadays being reported,” Dr. Chandrasekhar P said. And he gave tips for preventing arthritis with little lifestyle changes. “One should exercise routinely to maintain the flexibility of the bones. Don’t smoke as it can lead you to develop rheumatic arthritis. Consume a low-fat diet; increase the consumption of whole grains, fruits and vegetables. People who eat such foods are on a low risk of developing arthritis. Consume more of vitamin C if you are an arthritis, patient,” he adviced.
Posted by Unknown at 23:45